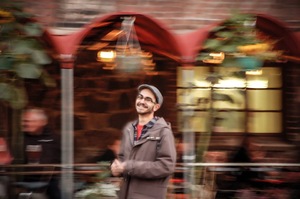 Nikolas Vardaxis is a Greek musician and acoustics engineer, born in Thessaloniki, Greece. He has worked on composition for soundtracks, sound design and music production for various personal or group projects. He is also involved in sound engineering (recording, processing, mixing, mastering), while his collaborations include a wide spectrum of young musicians, vocalists, drama players and filmmakers. A highlight for his soundtrack works was the participation in Cannes Film Festival 2015, Short Film Corner with the short movie Köttmuren (Meatwall), directed by Katerina Pavlou.

Fascinated by painting and music as a kid, he took classical piano lessons (7 years) but kept sketching too. His teenage years were mostly influenced by the hip-hop culture, which triggered a bigger interest for him in contemporary music and specifically djing, sampling and digital music composition. He studied Architectural Engineering, as a hybrid subject between Art and Science. In parallel, he developed his own sound exploration through contemporary electronic arts, while making his early steps as a dj and music producer. Consequently, he moved to Gothenburg, Sweden, to pursue a M.Sc. in Sound and Vibration (2012-2014), following his natural desire to gain deeper knowledge in sound waves, audio processing and combine sound and space, through those studies in Acoustical Engineering.

Nowadays, he is working in Lund University, Sweden, as a researcher in the field of building and room acoustics.

In many personal or independent projects he is going under the alias “Azem”.

Nikolas is building his home studio in Malmö, Sweden.

Soundtrack production for “Candygal", a short film produced and directed by Katerina Pavlou.

Screening “Köttmuren” and attending the festival (more info below).

Participation with a music track as the filmscore in “Stopp Polis!”, a short film produced and directed by Sofie Gällersprång and Kristian Vlajkovic.

The item was added to the cart